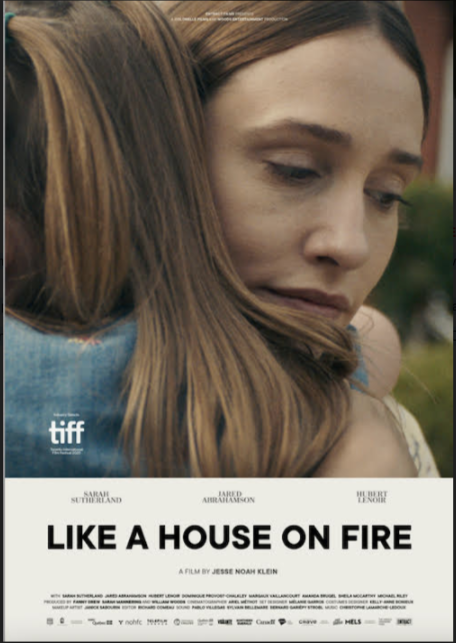 Dara returns home to reconnect with her husband and her young daughter, whom she left two years earlier. When she arrives, she discovers that a woman who is seven months pregnant has taken her place and that her daughter no longer recognizes her. LIKE A HOUSE ON FIRE tells the story of a woman’s struggle to regain the life she left behind.

It’s impossible to verbally express the complexities of Motherhood. It is a battle of extreme highs and lows. It arrives with ceaseless bouts of irrational fear and unsolicited advice. It is completely unpredictable. The singular constant is an innate, unconditional love you feel for another human being. Like A House On Fire is a film that engulfs the viewer all those emotional states at once.

Sarah Sutherland gives a nuanced performance as Dara. She is lost in guilt and confusion.  She is delicate and vulnerable. You will live in her anxiety. It radiates effortlessly from her pores. Writer/director Jesse Noah Klein affords Sutherland a coming-of-age story. It’s a breathtaking watch.

Like A House On Fire dives headfirst into fear, redemption, and self-actualization. With a quiet score, and intimate cinematography, including thoughtful close-ups, this film will burrow a hole into your heart. The script tackles forgiveness and cyclical parenting in smart ways. Everyone’s trauma is explored which is merely one of the shining aspects of this film. It’s the flaws that make the performances resonate. Like A House On Fire is an important film. It is your duty as an audience member to listen to Dara. This script can be a teachable moment.

LIKE A HOUSE ON FIRE was written and directed by Jesse Noah Klein and was produced by Fanny Drew, Sarah Mannering, and William Woods.  The film stars Sarah Sutherland and Jared Abrahamson.  The film has a running time of 84 minutes and will not be rated by the MPAA.

Game Theory Films will release LIKE A HOUSE ON FIRE on March 30th on digital platforms including iTunes/Apple TV, Vimeo on Demand, and Amazon Direct.

For more information, go to: www.gametheoryfilms.com