Just in time for holiday shopping for those documentary lovers in your life, First Run Features have released their incredible documentary, The New Rijksmuseum. Feel free to re-read my review below to refresh your memory as to why this is worthy of adding to your collection. And for the next four days, all films are 50% off on First Run’s website.

Just when I thought films about the inner workings of an art museum couldn’t get much better than Frederick Wiseman‘s National Gallery, along comes Oeke Hoogendijk‘s The New Rijskmuseum. Capturing the tumultuous journey of renovating the Rijskmuseum starting in 2003, I doubt the filmmakers, much less the administration of the venue knew that it would take 10 full years to complete the project. Think about that – one of the finest cultural institutions in the world, the home to many Rembrandts (including the famous The Night Watch) and four of only thirty-four of Johannes Vermeer‘s paintings in the world, was CLOSED, not open to the public, for 10 years. 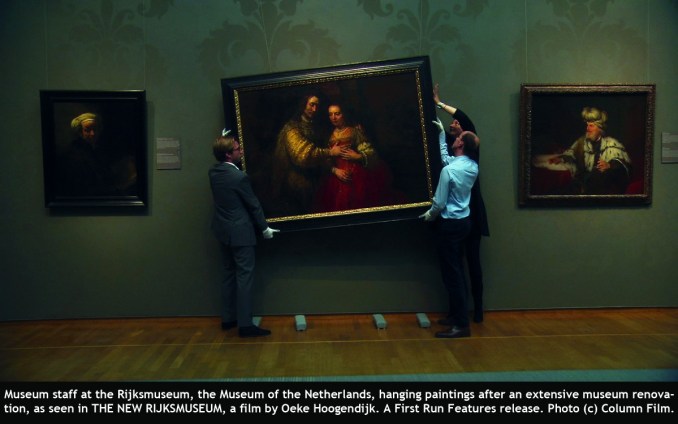 Director Hoogendijk has unfettered access to the process which is carefully laid out at the outset of the film in a voiceover by Queen Beatrix from 2001:

The accessibility of our cultural heritage for a wide audience calls for changes in the museological establishment. Government funds have been made available for the large-scale renovation of the Rijskmuseum of Amsterdam

Under General Director Ronald De Leeuw, the Rijksmuseum begins its transformation, which was to to take initially 3 years and happen with a budget of 134 million euros. But as I always say, construction is the biggest racket out there and no project ever comes in on time or on budget. So what unfolds is not so much a comedy of errors, but a comedy of bureaucracy. The architects, Cruz y Ortiz from Spain, won the bidding/contest with their design for the new grand entrance, but their design comes under fire when the local cyclist union fights back against the plan because it limits the space and access to the cyclists of Amsterdam who have come to appreciate and rely on the access to the passage under the Rijskmuseum. At all angles, the city council equivalent shoot down the Rijjskmuseum’s plans and force the architects to change their design which is no small task. 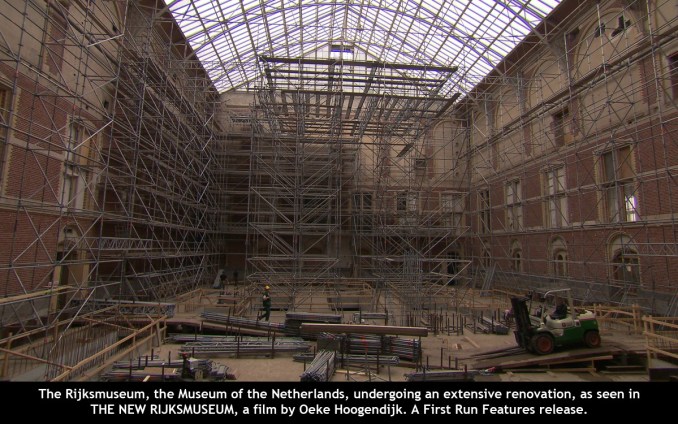 As the film trundles along, interweaving shots of the renovation with musings by museum staff or footage of missed opportunities at auction in an effort to secure new works for the opening, Hoogendijk easily builds the suspense that this project may never finish and it is that premise that keeps us wholly engrossed. De Leeuw ends up quitting, tired of fighting with the Cyclist Union and Wim Pijbes takes his place bringing with him his own ideas of how the space should look despite what the designers and curators think unlocking another level of bureaucratic interference. But the the folks who don’t get to go behind the curtain of an institution like this to see how it ticks, what unfolds is incredibly fascinating. That the placement of 6 or 7 cannons to be displayed can cause such a contentious argument between the principles at the museum is exasperating, even for us viewers. That this undertaking was so incredibly massive to begin with that it isn’t hard to believe the time it took to complete. 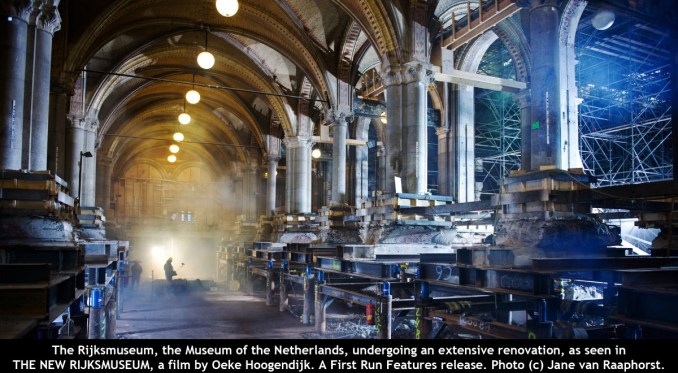 Hoogendijk’s camera penetrates this process in a way that really captures so much of the essence of the human spirit and its thirst for artistic inspiration. The film itself is reflective of this very notion. Over the course of ten years, I can’t even begin to imagine the amount of footage that was shot. To cull it down to a 2-hour film must have been a gargantuan task (although rumor has it there was a 4+ hour cut at one point…which I would watch without hesitation). That she was able to make this film as engrossing as it is is really a testament to how dialed in Hoogendijk was throughout this process.

While you might not think that a film about the renovation of an art museum in Holland would be interesting, I’m here to assure you that assumption would be incorrect. I would happily slate this documentary in my top five faves in that arena for the year so far.

First Run Features’ “The New Rijksmuseum” Is Out Now on DVD

Go To The Movies Review: ‘CHRISTMAS, AGAIN’ is a true N…